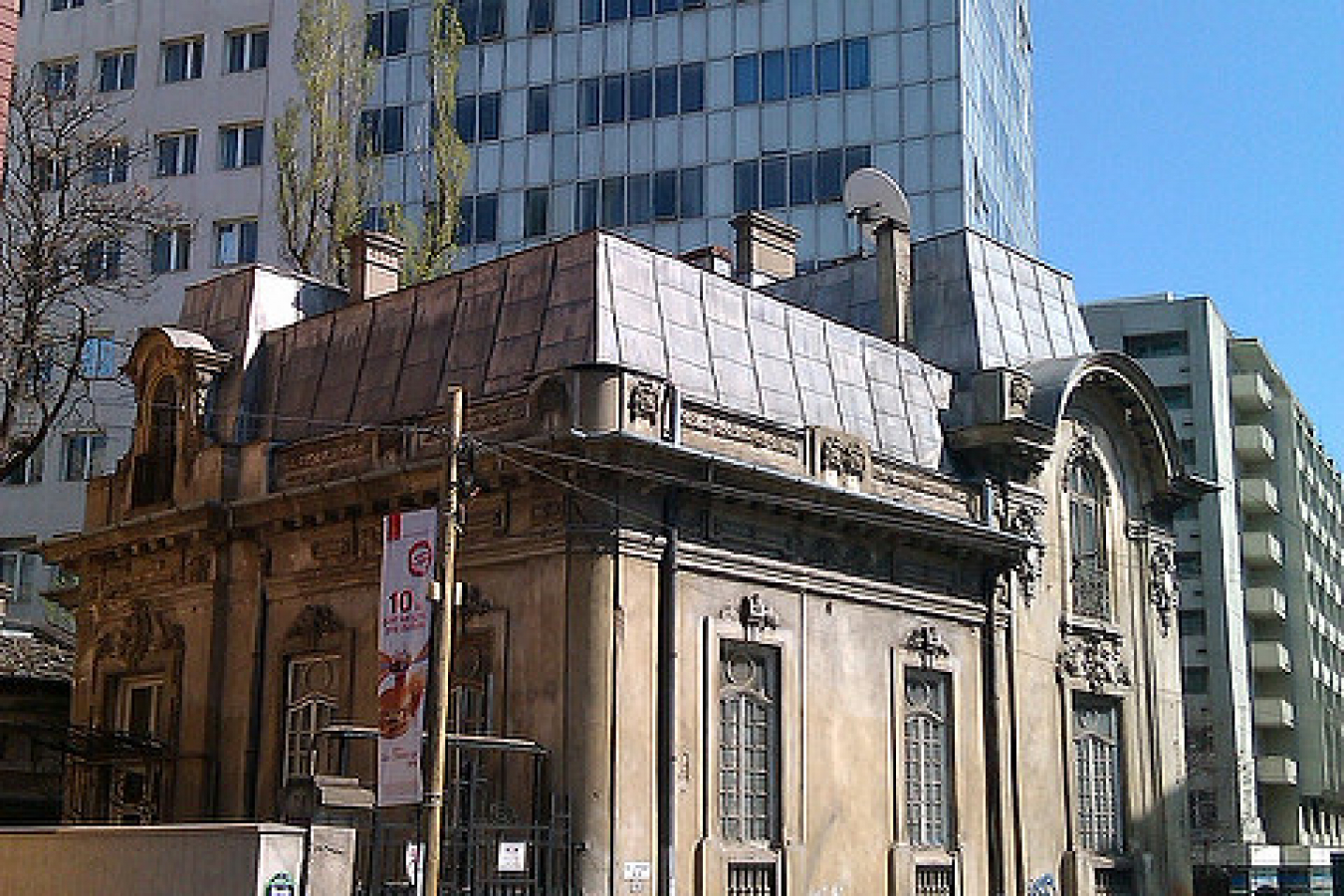 Romania is located in southeastern Europe to the east of the Balkan States, being the eastern- and northern-most country of the Balkan Peninsula. On 01 January 2007, along with Bulgaria, Romania joined the European Union to form the EU-27.

It has a small but premium coastline on the northwest of the Black Sea between Bulgaria on the south and Moldova to the east, while the eastern and southern Carpathian Mountains run through the center of the country. The Transylvania Basin, a geologic feature, occupies the central and northern-western half of the country, nestled between mountain ranges nearly all around. It is perhaps most commonly famous for the legend of Dracula, probably loosely based upon Transylvanian-born Vlad III Dracula of Wallachia, also known as "Vlad the Impaler" (1456–1462).

Romania has the seventh largest population and the ninth largest territory in the EU-27. The national language is Romanian, an Eastern Romance language most closely related to French, Spanish, Italian and Portuguese. It is divided into 41 counties plus the municipality off Bucharest.

The country as we know it today was formed in 1859 when the principalities of Moldavia and Wallachia merged under the ruler Alexandru Ioan Cuza. He was replaced in 1866 by Hohenzollern-Sigmaringen who became known as Prince Carol of Romania.

During the Russo-Turkish War of 1877-1878, The Kingdom of Romania fought alongside the Russians and provided an opportunity for Romania to gain full independence from the declining Ottoman Empire. At the Treaty of Berlin in 1878, the great powers (the United Kingdom, Austria-Hungary, France, Germany, Italy, Russia and the Ottoman Empire) formally recognized Romania as a sovereign state.

In World War I Romania fought alongside the Triple Entente, the alliance made up of the United Kingdom, France and Russia. At the end of the war the territories of Transylvania, Bessarabia and Bukovina merged with the Kingdom of Romania.

During World War II Romania experienced many power struggles. King Carol II abdicated the throne in 1940 to Ion Antonescu, a fascist dictator who fought alongside the Axis. As the Soviet army advanced on Romania's eastern borders, King Michael I, along with pro-Allied politicians including the Communists, staged a coup against Antonescu and joined the Allies, declaring war on Germany. However, a Soviet occupation took place, and in 1945 King Michael was forced to appoint a pro-Soviet government - designating him as little more than a figurehead. He was forced to abdicate on 30 December 1947.

After King Michael's abdication, Romania was declared a republic and remained under direct economic and military control of the USSR until the late 1950s. Romania's resources were drained by mixed Soviet-Romanian companies designed to mask the looting of the country by the Soviet Union, in addition to excessive war reparations paid to the USSR. Many people were imprisoned for political, economic and other unknown reasons.

In 1958 an agreement was reached which ended in the withdrawal of Soviet troops. A more independent state of affairs followed in contrast to other Warsaw Pact nations, with Romania condemning the invasion of Czechoslovakia led by the USSR, a continuation of diplomatic affairs with Israel after the Six-Day War, and the establishment of diplomatic and economic relations with West Germany.

In March 1965, Nicolae Ceausescu came to power as first secretary of the Romanian Worker's Party. Some of his first actions were to change the name of the party to the Romanian Communist Party and to declare the country the Socialist Republic of Romania, rather than the People's Republic. In 1967 he consolidated his power by becoming president of the State Council and later declaring himself President of Romania.

Initially popular with the people for his independent actions in comparison to other Warsaw Pact nations, he refused to implement liberal reforms at home, following a Stalinist path eschewed by the Soviet Union. Speech and media were strictly controlled by the Securitate, Romania's secret police and "urbanization" and "industrialization" plans were implemented in which Ceausescu planned to bulldoze villages in order to move peasants into blocks of flats in the cities.

In addition, he took more than 13 billion in foreign debt from Western countries that saw him as a maverick in the Warsaw Pact and hoped to cause a schism by funding his government. His decisions in taking the money were not always very favorable. In an attempt to correct his mistakes, Ceausescu decided to erase Romania's foreign debts.

During the 1980's he ordered the export of most of Romania's agricultural and industrial production, resulting in massive domestic shortages that drastically reduced the standard of living for Romanians. The foreign debts were fully paid in the summer of 1989, but tensions had already grown to a boiling point in the country.

Out of all the Eastern European revolutions of 1989, Romania's was the bloodiest.

In December of 1989, Ceausescu's regime collapsed in a series of violent events in Timisoara and Bucharest. The exact details of events remain controversial. Ceausescu was forced to flee the capital amid mass demonstrations that killed many people. After roaming the countryside, he was eventually captured, with his wife Elena, and condemned to death by a military court on Christmas Day, and both were summarily executed.

After the revolution of 1989, Ion Iliescu, a former member of the Communist Party leadership, became leader of the short-lived post-revolution National Salvation Front party. The party immediately assumed control of state institutions, including the media outlets.

In May 1990, Iliescu was elected as Romania's first post-revolutionary president. The elections were condemned by Romanian traditional parties and the western media as un-democratic, but he remained a leading figure in and out of Romanian politics until 2004. Traian Basescu succeeded him

In 1993 Romania applied for membership in the European Union, becoming an Associated State in 1995, an Acceding Country and a member of NATO in 2004, and a full member on 01 January 2007.

Like other former Communist countries in Europe, Romania is still coming to terms with its past. Many files from the former Securitate are still sealed, and plans to open them up are still in discussion. Many people are coming forward on their own in admitting that they informed on friends and colleagues.

The disclosures are a result of a campaign called "Clean Voices" started by a Romanian newspaper. Many of those who chose or were forced to inform on others were journalists. The campaign has drawn some criticism as it only seems to expose low-level informers while ex-Securitate officers are protected and, in some cases, still hold high-level intelligence positions.

Some worry about the repercussions of opening old wounds because of the myriad grey areas that exist. Many people were forced to inform on people to avoid having to commit more serious transgressions against others, or to protect a family member from persecution or harassment. Blackmail was common and in many cases the Securitate files contain outright lies.

This unresolved recent history is the basis for a number of concerns today from the rest of the European Union regarding corruption and criminal activity within Romania. The concerns exist to the same or even greater extent with many of the neighboring countries, namely the Ukraine, Moldova and Bulgaria.

Romania is a semi-presidential democratic republic in which executive power is shared by the president and prime minister. The president is elected by popular vote and has a term of five years, after a constitutional amendment in 2003. The Romanian Government is headed by the prime minister, who appoints the other members of his or her cabinet and who is usually the head of the party or coalition that holds a majority in the parliament.

The legislative branch of the government, collectively called Parliament (Parlamentul Romaniei), is made up of the Senate (Senat) and the Chamber of Deputies (Camera Deputatilor). Members of both chambers are elected every four years.

The justice system of the Romanian Government is independent of the other two branches, and is comprised of an hierarchical system of courts. The highest court is the High Court of Cassation and Justice.

Romania had a GDP per capita of $9,446 in 2006 and is considered an upper-middle income economy. After the revolution of 1989, Romania experienced a decade of economic instability and decline. Since 2000 the situation has stabilized significantly, with low unemployment and high growth. Foreign debt is currently at 20.3% of GDP.

Exports have been increasing exceptionally in the past few years, with the main exports being clothing and textiles, industrial machinery, electronics, raw materials, metallurgic products, cars, military equipment, software and agricultural products. Trade is mostly with European Union member states, Germany and Italy being the largest trading partners. The country has a large trade deficit, however, as it imports 37% more goods than it exports.

Foreign investment has been on the increase since 2000, becoming the largest investment destination in Southeastern and Central Europe. A 2006 World Bank report ranks Romania as 49th out of 175 economies in the ease of doing business, scoring higher than some other countries in the region, such as Hungary and Poland.

2007 marks the first year of Romania's entry into the EU, which it joined alongside Bulgaria on 01 January. Huge celebrations were held in Bucharest, marking a historic New Year for the country.

While most EU nations have placed restrictions on workers from both new member states (with exceptions such as Finland, and Sweden), it is expected that free trade and movement will help Romania rise to higher levels of prosperity, as exemplified by the Eastern European countries that joined the EU in 2004.

The UK does now allow workers from Romania and Bulgaria to work in the UK without special permission, although it extended its Sector Based Scheme program specifically and exclusively for the two countries. The UK experienced a much higher than anticipated level of immigration after the last EU enlargement.

Prime Minister Tariceanu says that mass emigration from Romania will likely not be a concern, as it is now very easy to find work at home and wages are rising. More than two million Romanians already work legally in the EU, with perhaps another one million illegal workers that are now eligible to register and work legally. It is generally felt that that the majority of Romanians inclined to work outside of Romania are already doing so.

The country is worried about some of the changes in legislation that come with EU accession. Romania has a very large rural population, and new rules will be introduced in all areas of agricultural production. Animals will need to be slaughtered in designated abattoirs, and only vets will be allowed to perform castrations. Homemade alcohol will not be allowed to be sold.

While the changes may prove to be difficult for some, the rural population of Romania is hopeful. Many people still live in abject poverty and they feel that joining the EU is a step in the right direction for the future of the country.