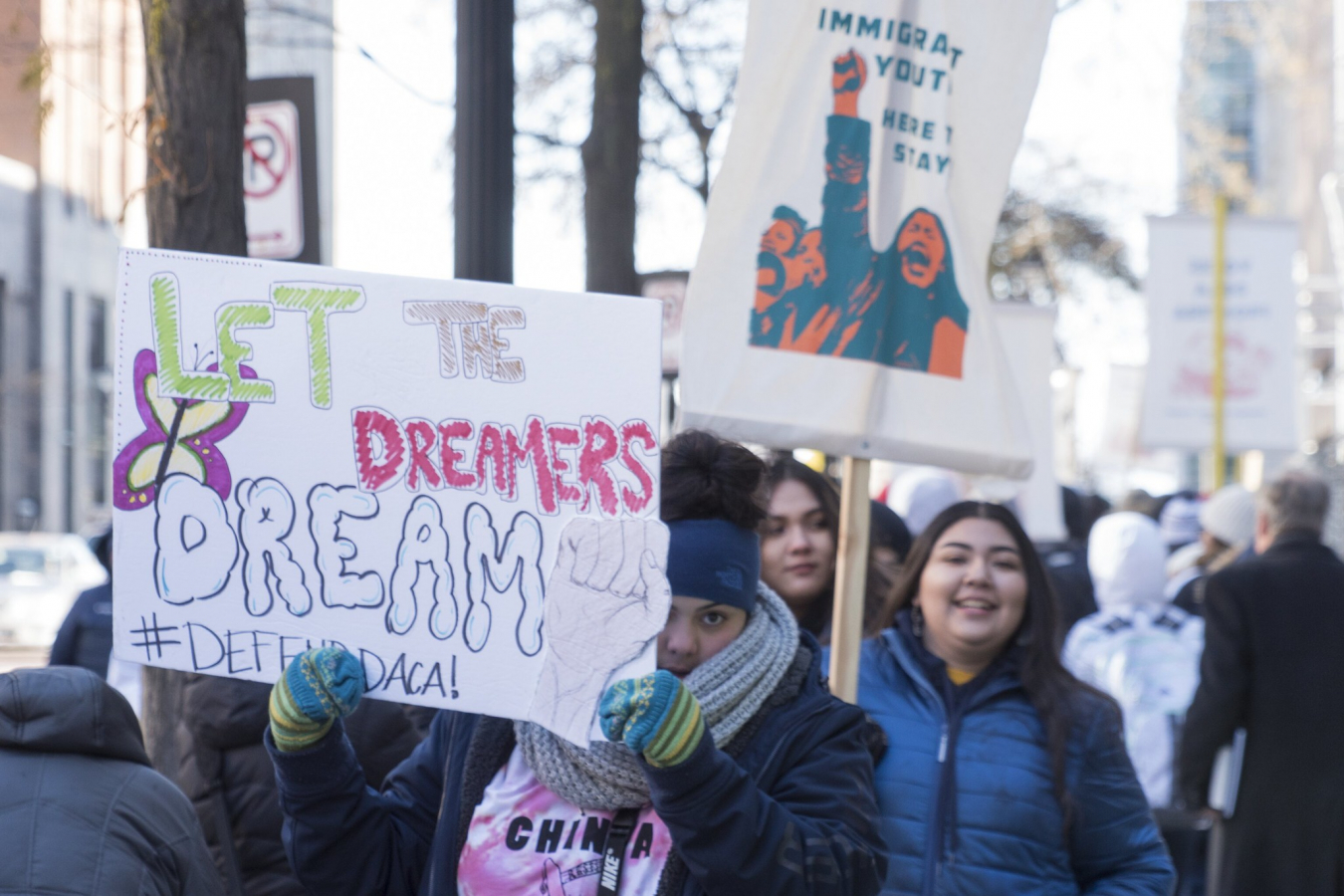 March for the future of Dreamers

Donald Trump cannot deport all illegal migrants even if he wanted to.  It is not feasible to deport, what is probably more than ten million migrants.   Nobody knows for sure how many there are.  It is interesting to note that the so called “right wing” Republican American President Trump elected on an anti-immigration platform, has deported fewer people than the supposedly more liberal Democrat President "Deporter in Chief" Obama.  The Obama administration deported 1.18 million people in his first three years.  Late last year under Trump the number of deportations was a little under 800,000.

Despite a recent Supreme Court ruling preventing Trump from ending the Deferred Action for Childhood Arrivals (DACA) scheme, the US President is reportedly planning to refile paperwork to scrap the Obama-era legislation.

The DACA program protects thousands of young migrants, brought to the US illegally as children, to receive a renewable two-year period of immunity from deportation and become eligible for a US work permit.

However, Trump is once again targeting an end to the program. According to several reports in the US, paperwork to start proceedings to end the program was due to be filed week commencing 29 June. This was pushed back and is now expected to be filed at some point in the week beginning 6 July.

Renewed efforts to end DACA were expected following the Supreme Court’s ruling in June, which said that the Trump administration had ‘failed to provide solid evidence that justifies ending the program as required by federal law.’

However, the court clarified that Trump does have the authority to end the program, giving the President a pathway to try again or run the risk of backing down.

A day after the ruling, Trump told Fox News: “We have to refile. And everything’s going to work out for DACA and the young people, who aren’t so young, if you want to know the truth.”

DACA doesn’t have to end

Although the Supreme Court ruling, written by Chief Justice John Roberts, opened the door to refile paperwork, the court did not specifically say that the administration had to do it.

Aaron Reichlin-Melnik, policy counsel at the American Immigration Council, said: “This is not something the Trump administration has to do. The Supreme Court did not tell Trump that he was required, as Justice Roberts said, to refile the paperwork.”

Trump’s new filing is likely to be challenged again in court. However, it’s unlikely that the DACA program will be scrapped prior to November’s presidential elections. Instead DACA will become a key election issue and could shine the spotlight on the failure of Congress to agree a US immigration deal.

In 2017, DACA was rescinded by the Trump administration, a move that was central to the President’s efforts to clampdown on immigration when taking office. This gave Congress six months to come up with a solution that would replace DACA, while prohibiting new applications and renewals, but without ending the program completely.

However, the ruling from Justice Roberts overturned Trump’s 2017 decision, saying that it does not adhere to the Administrative Procedure Act – in part because it failed to consider the potential effects of the motion on DACA recipients.

Reichlin-Melnick said: “Justice Roberts’ decision made clear the Trump administration must at the very least consider the impact on the 670,000 people who currently have DACA as well as the impact on their 250,000 US citizen children and families and employers.”

Dreamers have huge bipartisan support, according to several polls. However, Trump’s allies in favor of restricting legal and illegal immigration have argued that the President has very few options other than to pursue an end to the DACA program

RJ Hauman, head of government relations at the Federation for American Immigration Reform, said: “Overall absurdity of the ruling aside, the Supreme Court provided a clear procedural roadmap of how to rescind the program. We expect the administration to do so in the coming weeks.”

Amid a slump in the polls, Trump has reignited the immigration issue in a bid to appeal to his core supporters. Trump recently suspended US work visas for the remainder of the year, a move celebrated by his allies who view it as protecting American workers due to a devastating economic downturn caused by COVID-19.