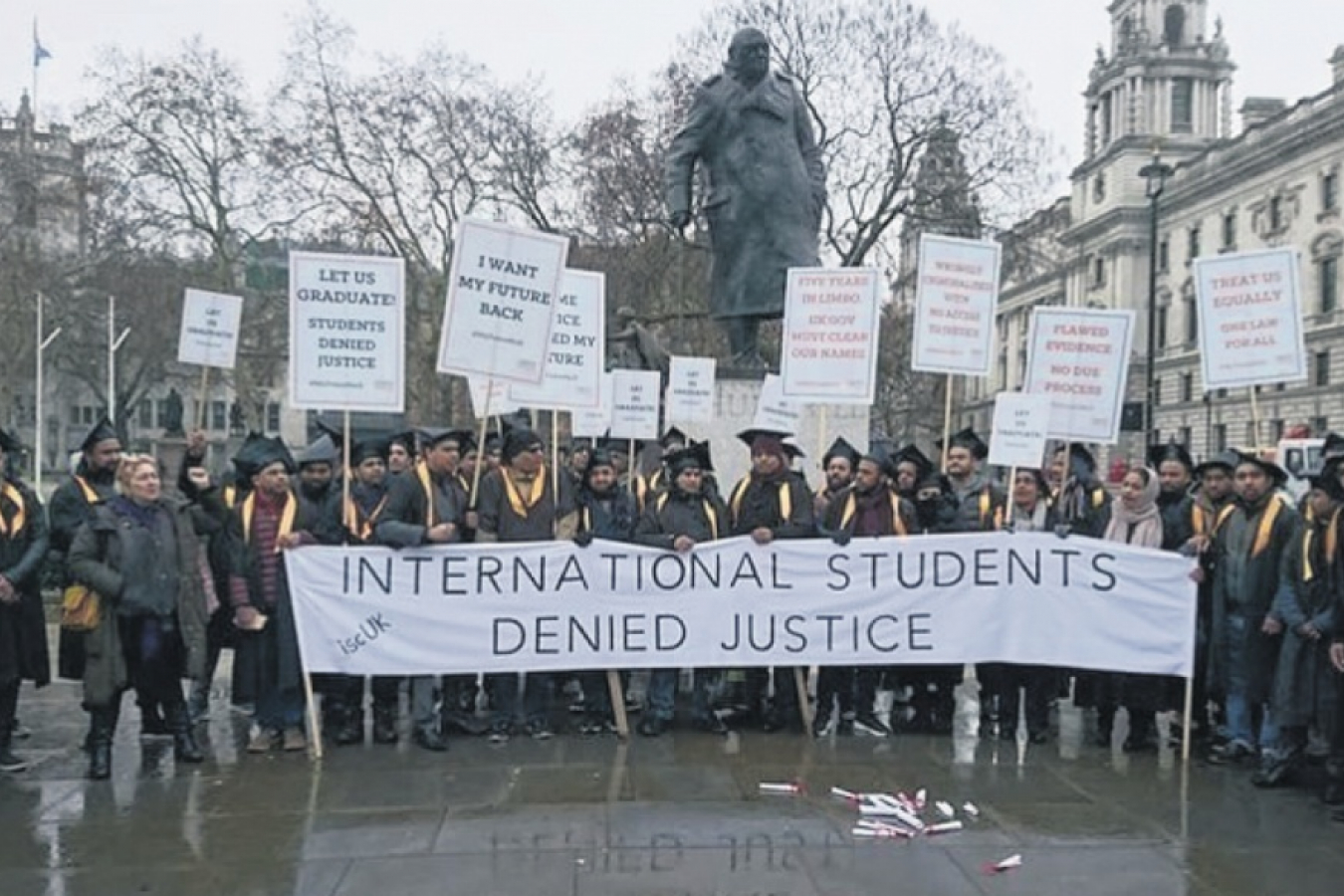 Most people do not realise just how commonplace injustice is in the UK.  In court cases it is frequently the case that one or both sides do not tell the truth.  Those who are honest and truthful may actually be at a disadvantage and are more likely to lose.

Too much of the time winning in Court does not mean that “justice has been done”.  Perhaps the winning side was willing to do disreputable things that the other side was unwilling to do to win.  Perhaps the judge was sympathetic and perhaps another judge would have a completely different point of view given the same set of circumstances.  Perhaps the winning side could afford better legal representation and had more experience in litigation.  It is commonplace for unjust decisions to be made, especially in cases involving BAME (Black and Minority Ethnic) migrants.

If it is said that these Tier 4 visa students have cheated what does it mean?  It could very well mean that under the “hostile environment” policy these students have been targeted and that they have unjustly been found guilty of fraud.  Given the extremely poor record of the Home office in treating migrants fairly, there must be a great deal of doubt as to whether many of these students have in reality done anything wrong.  In addition, the court system frequently make judgements that are not actually true!  Further details of what happens in court can be seen in the Secret Barrister site.

This may turn out to be another Windrush type scandal.

International students who had their UK Tier 4 study visas revoked amid allegations of cheating on English language tests (ELTs) have reignited the fight to clear their names. Hundreds of foreign students recently descended on Parliament Square in London to protest against government accusations of cheating on ELTs as part of the visa process.

According to a report published by The Guardian, some 200 students took part in the protest. Following a BBC Panorama investigation in 2014, then Home Secretary Theresa May suspended ELTs and revoked approximately 34,000 Tier 4 visas as international students faced accusations of cheating by the Home Office.

Following the allegations, around 1,000 international students have been forced to leave the UK – many were arrested and detained by UK immigration officials. However, thousands have protested their innocence, with many taking the Home Office to court, spending tens thousands of pounds in an effort to clear their name.

As part of an ongoing campaign to clear their names, hundreds of international students have sent a letter to Downing Street.

An excerpt from the letter reads: “We were innocent, but our UK visas were refused or revoked, and the government gave us no way to defend ourselves. Our futures were destroyed, and we were left to fight a years-long legal battle costing each of us tens of thousands of pounds.”

“The Home Office has stolen our futures, branding us frauds and forcing us to bear a lifelong mark of shame. Many of us are destitute, barely able to survive or care for our families, having spent everything we own trying to clear our names. Many of us are suffering from severe stress and depression. Some of us have even attempted to take our own lives because we see no other way out,” the letter says.

Despite the undercover BBC Panorama investigation proving some fraudulent activity during ELTs at one test centre, campaigners have said that the Home Office was wrong to assume that the majority of students, who had taken the test at dozens of centres across the UK, had also cheated.

Based on evidence provided to the Home Office by the private company it had outsourced the test to, the government agency claimed that 34,000 of the 58,458 international students who had taken the test between 2011 and 2014 had ‘definitely cheated.’

The Home Office also claimed that a further 22,600 had ‘questionable results’ and concluded that just 2,000 had ‘definitely not cheated.’

Campaigners have continuously questioned the validity of the Home Office’s claims that so many people had cheated, saying that ‘it’s highly implausible.’

Labour MP for East Ham, Stephen Timms, who delivered the letter to Downing Street on behalf of the students, sided with campaigners saying: “It’s implausible that 90% of those who took the Home Office test were involved in cheating.”

It’s understood that many of Timms’ constituents have been affected by the allegations.

“Their money has gone, often their family’s life savings were invested in getting them a decent British education that’s been completely lost. I am appalled by the terrible hardship that has been inflicted on them by a false allegation that the British government simply accepted,” Timms added.

The House of Commons’ Public Accounts Committee, which published a report in 2019, concluded that the Home Office’s allegations were flawed and accused the agency of ‘rushing to penalise’ international students causing ‘injustice and hardship for many thousands of international students.’

Migrant Voice, a charity that has been supporting international students affected by the allegations, described the situation as a ‘mammoth injustice.’ Migrant Voice director, Nazek Ramadan, said: “There is a mountain of evidence that proves they are victims of a mammoth injustice – and the government can ignore this no longer.”

Comparisons have often been made between the Home Office’s treatment of the accused international students and victims of the Windrush scandal. Former Home Secretary, Sajid Javid did promise to review the treatment of students in the aftermath of the Windrush debacle. However, the review never happened.

Javid’s successor, Priti Patel, recently pledged to accommodate recommendations made by an internal inquiry into the causes of Windrush, offering hope to students that their cases may be reviewed with renewed compassion.

However, Matt Rycroft, the new permanent secretary at the Home Office hinted that there is reluctance to revisit the international student issue again. During a Public Accounts Committee hearing, he said: “My heart goes out to people who are innocent who were caught up in this.”

Mr Rycroft went on to say that the Home Office stands by the decision it made at the time to revoke the visas of more than 30,000 students, arguing that systematic fraud must be stamped out.