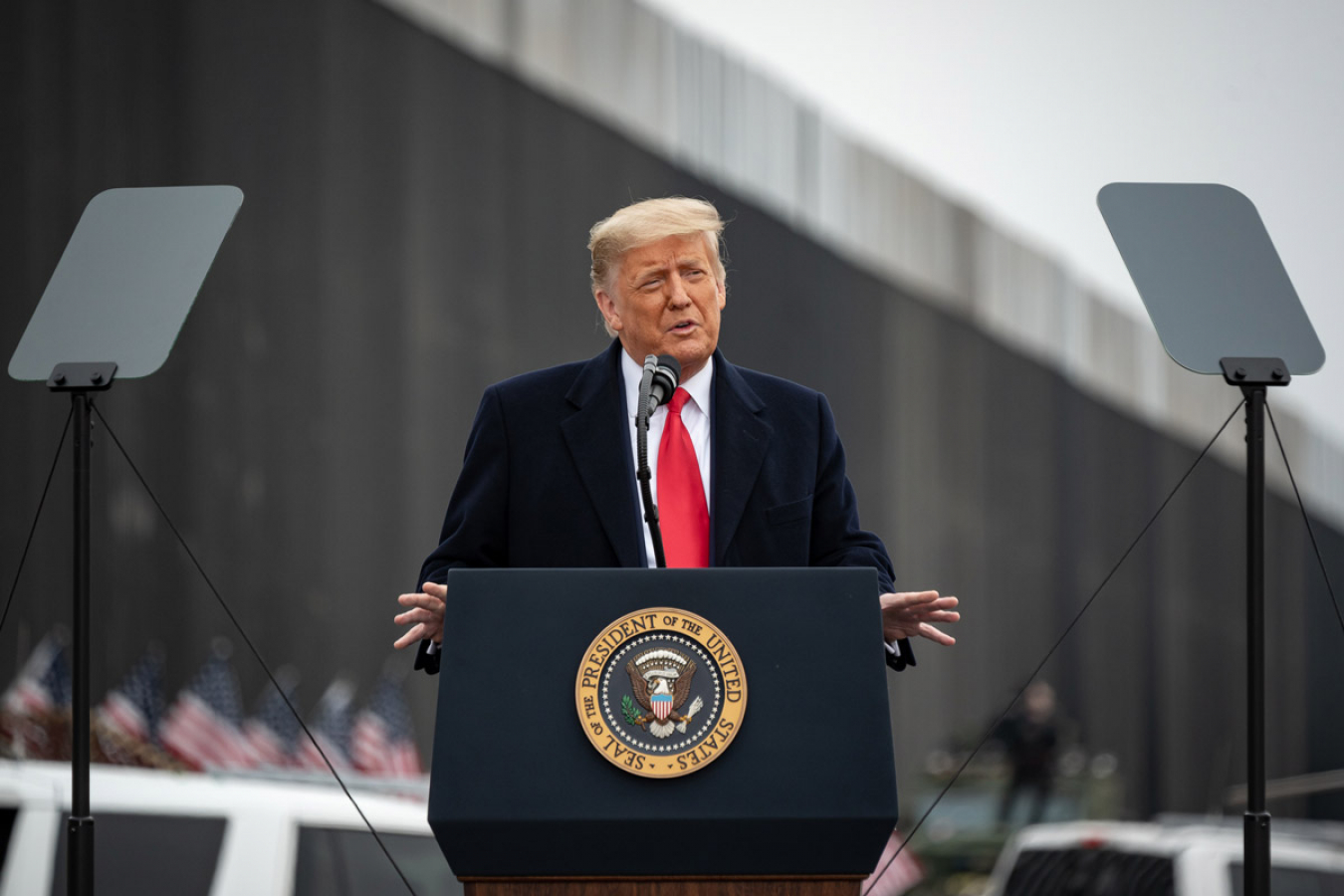 Former US President, Donald Trump, visited the US-Mexico border recently and announced plans to finish his anti-immigrant border wall using private funds. Trump, who failed to complete his wall using federal funds, is seemingly attempting to rally his base at a time when he’s not been in the spotlight and is unable to use social media due to a series of bans.

During a recent rally in Ohio, Mr Trump blasted Joe Biden’s US immigration policies, saying: “Illegal aliens are overrunning our borders. Nobody’s ever seen anything like it. Our poor borders, they were so perfect. They were so good.”

Under Biden, construction on Trump’s largely failed wall was ended, as were rules that prevented the most vulnerable asylum seekers from entering the US while their claims were being processed.

The change in policy has since led to a surge in the number of children and families arriving at the US-Mexico border from so-called Northern Triangle countries like El Salvador and Honduras.

The Biden administration has built makeshift camps to house thousands of children, while facing criticism from Trump and other Republicans that Democrats are too ‘soft’ on US immigration.

Throughout his presidential campaign and his presidency, Trump frequently bragged about building a new wall along the southern border and even famously said that ‘Mexico would pay for it’.

The reality of Trump’s wall was that he only managed to build a few miles of ‘new’ wall, none of which was paid for Mexico.

Meanwhile, in a recent twist, Greg Abbott said that he will use state funds, which originally came from the federal government, to try and construct a wall. The Texas governor has also said he will seek private donations and set up a crowdfunding website.

Yet, this comes with risks, given that in 2020 Trump’s former top adviser Steve Bannon and three others were charged with defrauding members of the public by collecting funds for a wall that was not built. The men pleaded not guilty, while Bannon himself was pardoned by Trump in one of his very last acts as President.

Doing what the Biden administration won’t

Mr Abbott told Fox News: “Texas is going to do what the Biden administration is refusing to do. Texas is going up step up and secure our border. We will be using every tool available to us under the law. we will ensure that we build the wall, arrest people and make Texas safe, and send a message to Washington DC – stand up and do your job.”

However, Mr Abbott’s comments were criticized by Democratic strategist, Matt Angle, who said: “Mr Abbott will twist and bend every rule to try and build the wall, but it won’t do any good.”

“Greg Abbott has spent the last 10 years spending millions of dollars on border security, and it has done nothing. All they do is stir people up. Greg Abbott is now like Trump,” Angle added.

Meanwhile, Professor of Politics at the University of Virginia, Larry Sabato, said that polling shows that Democrats – including President Biden – ‘are not rated highly on the US immigration issue and are seen as too soft’.

“US immigration has consistently been one of Trump’s best issues,” Sabato added.

In recent weeks, Trump has started holding a series of rallies across the United States in one of the few ways that he has been able to connect with his supporters after he was banned from both Facebook and Twitter for making false claims that the 2020 election was rigged.

It’s unclear whether Trump will make a fresh presidential bid in 2024. If he did, it’s likely that he would be the most favoured Republican candidate. As a result, to keep his supporters fired up, and to keep himself relevant, Trump has been targeting the issues that he knows will score him points with his supporters.

Republican Texas congressman, Roger Williams, said: “Republicans understand what a severe case of invasion and illegal behaviour we have at the border. And the Biden administration has done nothing about it.”

Trump’s visit to the border comes hot on the heels of Vice President Kamala Harris’ recent trip to the border, her first in her new role. Harris was criticized by Republicans for visiting El Paso and not a so-called hotspot where more immigrants are seemingly crossing the border to enter the US.

Harris has been tasked with tackling the issue of rising immigrant numbers arriving at the border and recently visited Guatemala and Mexico where she urged migrants from Central America not to come.

During a speech stood next to Guatemalan President, Alejandro Giammattei, she said: “Do not come. Do not come. The United States will continue to enforce our laws and secure our borders. If you come to our border, you will be turned back.”